With its distinct and impressive geography, Guatemala attracts visitors, and then entices them to learn more about its beauty and interesting history, seen in the extraordinary structures left by the Maya Indians. The country’s natural beauty is seen in its high mountains, volcanoes, lakes, tropical jungles, rivers, and palm studded beaches. A trip to this nation lets you experience the beautiful construction of its historical cities, archeological sites full of the mystery of the fascinating ancient Mayan Empire, and the rich culture with its age-old traditions and diverse ethnic heritage.

Guatemala is a small country, with an area of 108,890 Km2 (about the size of Ohio or Portugal), located in northern Central America. Guatemala offers visitors a unique experience with its colonial style of life and varied climate. The colonial architecture and handiwork with cloth, masks and ceramics make some speak of this country as esthetically unique in the world. Guatemala is, without a doubt, an extraordinary voyage through the past millennium.

Each dish in Guatemala cuisine has its own story and origin. The recipes have cultural characteristics from each area that combine a mixture of meat and vegetables in sauces accompanied by corn tortillas. The most demanding palate will find here a pleasure-filled gastronomy with delicious flavors.

Any of these can be with alcohol or non-alcoholic. The traditional drink is the Ti Punck, a mix of rum, lime juice and concentrated cane sugar juice.

For centuries, Guatemala sheltered the most amazing civilization of the American continent. The Mayan Empire was scattered through the Central American regions of Mexico, Belize, Guatemala, Honduras, western El Salvador, and the Yucatan Peninsula. Great intellectuals, artists, and potters, the Maya Indians were considered to be one of the most advanced people of pre-Colombian America. They are credited with tremendous innovations in art, mathematics and astronomy, not to mention the discovery of chocolate.

Mayans developed a calendar based on the movement of the moon and the stars, a sophisticated numerical system, and built roads and cities, such as Tikal and Copao, at a time when Europe was still very undeveloped. Mayans designed their pottery to look like animals and people, and developed a polychromatic ceramic. The ruins of their huge stone, stair-step, pyramid-style temples are still very impressive today.

The height of their classic period flourished between 300 and 950 A.D. A later period demonstrated much Mexican influence, after which, there were splits into various groups and Maya learning and art declined. During the sixteenth century, Guatemala was colonized by the Spanish, who subdued the people with little difficulty. Bishops burned all but three of the Mayan bark cloth books, deeming them superstitious. In 1542 a Spanish captainship was established that included the provinces of Honduras, Nicaragua, Costa Rica and Guatemala. In 1742, Guatemala became the home of the first archbishopship of Central America. Only on September 15, 1821, after many riots and guerrilla warfare did the country finally gain its independence.

The political history of Guatemala is characterized by strong antagonism between the governing parties, alternately those wanting political and economic reform and dictators. Heavy corruption typified this environment. In the last half of the twentieth century, Guatemala was torn by civil war which dragged on for 36 years, leaving a devastated country with thousands homeless. A major earthquake in 1976 caused over twenty thousand deaths and much property damage. With the signing of a peace treaty in 1996, the country¹s situation improved, however lasting stability is still something to be pursued.

Guatemala is a warm and welcoming country; its inhabitants show the magic and simplicity of this area with large smiles always on their faces and great hospitality. Guatemalan culture is strongly represented by its population and its unique customs that have been passed from generation to generation.

The colorful, indigenous clothing are represented in the huipiles, handmade shawls with infinite possibilities for matching and which stand in sharp contrast to the local scenery. An infinite number of exotic crafts are represented by the ceramics sold in the local shops such as the Solola and the Santa Cruz del Quiché. In the Chichicastenango community, a suburb of El Quiche, a museum preserves an array of incense jars and a magnificent collection of jade and ceramic pieces.

The traditional music and dances are typical of many of the religious Mayan festivals. The high points of the legacy left by the Mayans are, without a doubt, the magnificent architectural structures represented in their ruins and in the patios of the archeological sites. The precision and detail in these constructions can be seen in the way they were lined up in order to allow each inhabitant to view the stars. With the passing of time, the constructions changed, being superseded by and joining others. The temples were built upon by other structures. The classic Mayan city of Tikal is a good example of this with its high pyramids and altars.

The colonial architecture is characterized by starkness in the external areas, but rich interiors. As they are in areas subject to tremors, the buildings are not very tall and are supported by large columns and pillars. The buildings possess both indigenous and Hispanic characteristics giving a distinctive character to the architecture. During Holy Week, at Easter time, Old Guatemala, the ancient capital of the country, is specially decorated with colored petals. Because of the earthquakes, churches have lost much of their Baroque splendor. Nevertheless, some are impressive, such as Merced, the San Francisco church, and Las Capuchinas.

The climate varies according to the altitude and the region. On the plains, the climate is generally hot while in the mountains, the temperatures are lower and thus, more temperate. On the coast, tropical conditions predominate; on the Caribbean coast, temperatures can hit 38o C with high humidity. In the tropical rain forests of El Peten, temperatures are hot, and the humidity varies in accordance with the time of year. Average temperatures are between 24o C./75o F. (high) e 13o C./55o F. (low).

Guatemala geography is quite diverse, composed of rivers, volcanoes, parks, and principally mountains. The mountain range that makes up the central plateau where the cities of Guatemala, Antigua, Solola, and Santa Cruz do Quiche are located is 260 kilometers long and parallels the Pacific coast. The lower plains are located in the northern part of the country, known as the Peten, where you can find petroleum and chicle trees. The country is a great concentration of volcanoes, the main ones being Tajumulco, at 3,722 meters, and Atitlan at 3.537 meters.

In Guatemala, we also find one of the principal ecological parks in the world, the Tikal National Park. Situated in a dense and well preserved tropical rain forest (with an area of 560 km2), this beautiful park is home to more than 4,000 Mayan monuments, including pyramids and temples where the Mayas conducted their ceremonies. In this park, you can find the Plaza Mayor Ruins with two enormous pyramid temples facing each other. The temple of the Jaguar, is 44 meters high, and the Temple of the Masks, 38 meters. The pyramids can only be appreciated externally since it is not permitted to climb them. Plaza Mayor gives us an idea as to how the city of Tikal might have been at its peak during the sixth century.

UNESCO declared the park an international heritage providing funds for its preservation and exploration. It is now a habitat for more than 300 species of birds, monkeys, and coatis. Another temple that attracts the curiosity of tourists is Temple Four. It is the tallest construction of the Mayan civilization. At 64 meters, it points itself to the sky revealing all of its beauty. In this Temple, it is permitted to climb to the top and view the amazing scenery.

The exchange is approximately US$ 1 to 6,40 – 6,60 quetzales. Check exchange rates before traveling. American dollars are accepted everywhere in the country. Most credit cards are accepted in the larger cities. Water: In general, the water is safe, however it would be wise to drink only bottled mineral water. When you leave the large cities and go to smaller towns, be careful; for your own safety, we recommend that you only drink bottled water. As in all countries, the hygiene and cleaning of food depends on the establishment you are in. In general, serious problems do not exist. It is not necessary to take any vaccines to visit this country.

In Guatemalan restaurants, the tip varies from 10% to 15% of the total bill. In some restaurants and bars, the tip is included on the bill On international flights, there is an exit tax upon departure of U.S. $30, and for domestic flights a tax of Q 5.00. There is a 12 % tax on all purchases and a 10 % hotel tax. The official language is Spanish. Guatemala also has other dialects such as Quiché, Cakchiquel, Kekchí, Mam, Garífuna and Xinca. Be sure to arrive early for trail hikes in Tikal Park.

Catholicism is the official religion. The electrical current is 110/220 volts. Regulations and requirements are subject to change without prior notice. It is wise to have a check-up with your doctor before you leave on your trip. It is recommended that you take light clothing, comfortable shoes, sunscreen, and insect repellent. Be alert for thieves watching for unsuspecting tourists. Do not take unnecessary risks. Some taxis are more reasonably priced than others. Ask for information at your hotel. Copa Airlines offer weekly flights; United also flies into Guatemala The best time to visit Guatemala is from September to April when the rains diminish. 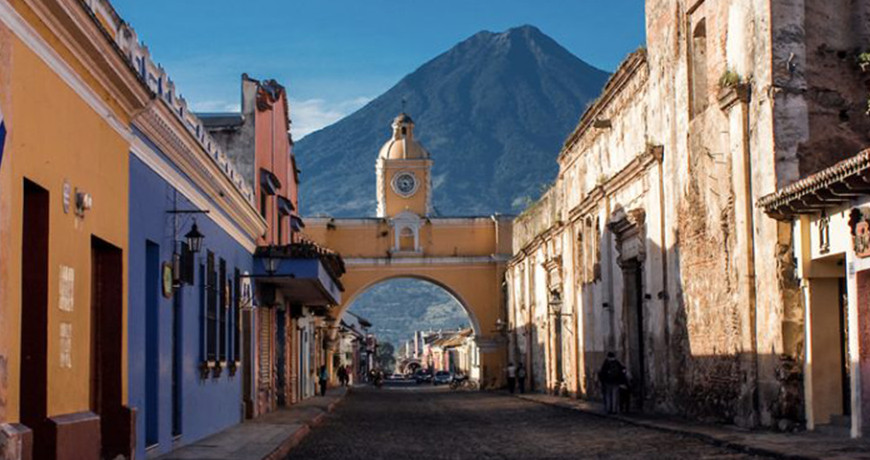 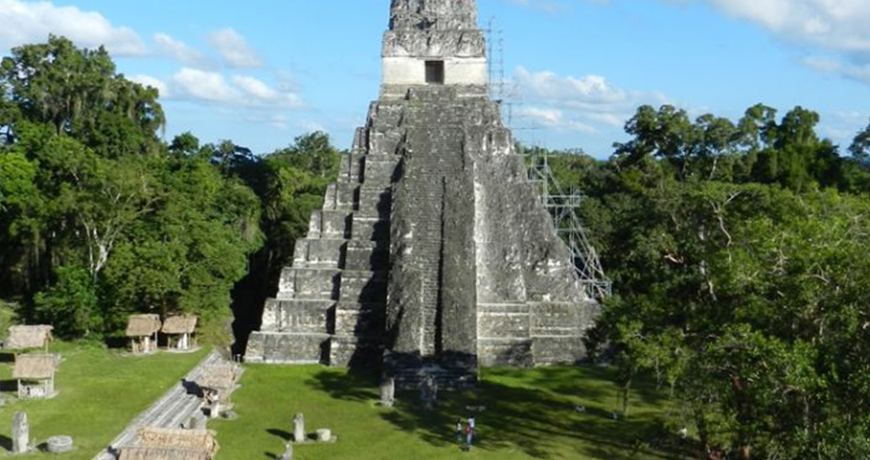